Our traditional Christmas Eve 7 PM candlelight service will feature plenty of Christmas music both for the congregation to sing and special music from the choir, culminating with Lois Ann Schaeffer's rendition of O Holy Night!  Please join us, everyone is welcome.

Before the service, you are also invited to join us at the parsonage from 6:00-6:45 (connected to the church, just park at the church and come on in through the church itself) for cookies, fruit, coffee, etc. as well gather for fellowship and enjoy the many Christmas decorations in our Victorian home.

Hope to see you all on Christmas Eve!
Posted by Pastor Randy Powell at 8:38 AM No comments:


Posted by Pastor Randy Powell at 2:24 PM No comments:

Stepping into history: A conversation with Jo Beach.


I had the privilege yesterday of visiting with a member of my church, something I do as often as I can for those who have difficulty in getting to church.  I went to the home of Jo Beach, who is in her 98th year and has been a member at First Baptist for over 80 years.  In our conversation, Jo talked about the past quite a bit, which is always fascinating to me as a lover of history.  Three things in particular stood out from that conversation: (1) That Jo's grandfather was a POW at the notorious Andersonville, Georgia prison in the Civil War.  Jo's grandfather never got over the horrors that he witnessed there, and was unable to work the rest of his life.  My grandfather was in the merchant marines in WWII which was 75 years ago, what an incredible step back into history that Jo's grandfather was a Civil War veteran, that war having ended 151 years ago. (2) Jo herself was born 16 days after Armistice Day, the end of WWI on 11/11/1918.  Her father was not yet conscripted, but would have soon joined the army to be shipped over to Europe, but the war ended. (3)  Jo was born near Cook Forest and her father worked at one of the lumber mills there.  The lumber mill only paid its employees with script redeemable at the company store.  One day, Jo's mother went to the store and demanded a portion of her husband's earnings in cash, to which the company employee replied, "What do you want cash for?"  Jo's mom made her husband quit his job, presumably after an interesting conversation, and the family moved before Jo started school here to Franklin where several of their extended family members already lived.

The next time you have a chance to talk to somebody who was born sixty years or more before you, take it, you won't regret the chance to get a glimpse at the window into the past that they can provide.
Posted by Pastor Randy Powell at 10:13 AM No comments:

Local special-education teacher Kari Yount has accepted a part-time position at First Baptist to work with our youth with the emphasis upon Junior Church and the Awana program.  Kari and her new husband Catlin are currently in Florida enjoying their honeymoon, so it will be a few weeks until she posts for herself, but for now we'd just like to welcome the Yount family to the church and share our excitement at having someone so qualified and enthusiastic to work with our great kids.  Welcome to First Baptist, Kari! 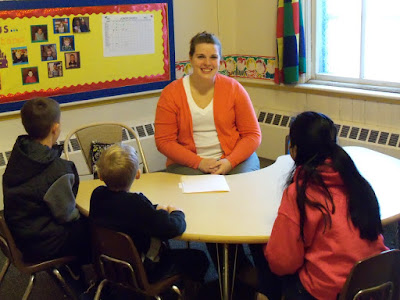 Posted by Pastor Randy Powell at 9:30 AM No comments: 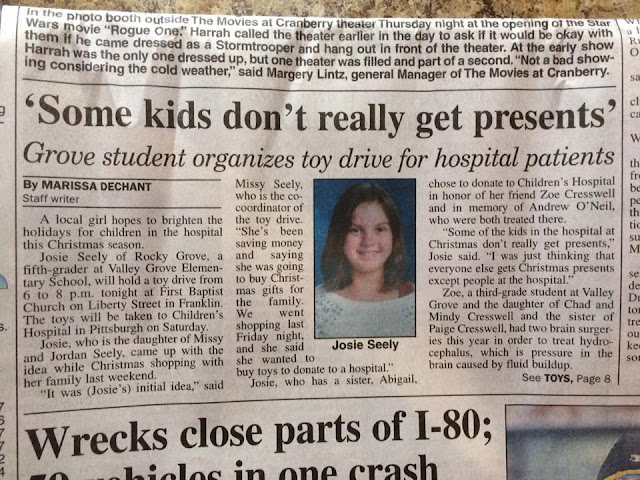 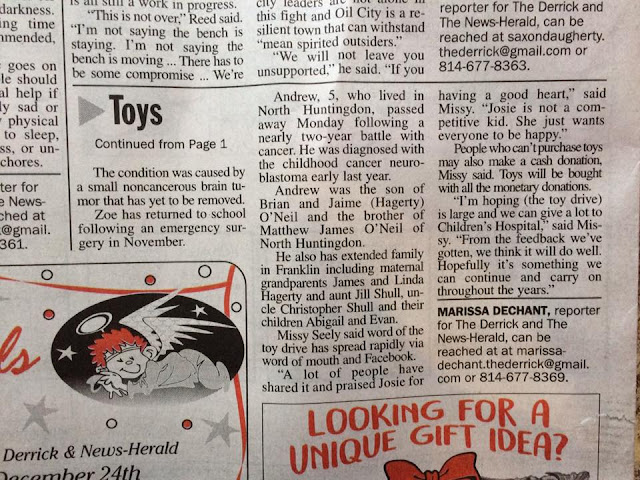 One of the youngest members of First Baptist, Josie Seely, has helped inspire a toy drive with a collection taken up tonight here at the church.  It is awesome to see young Christians in our church reaching out to help the less fortunate in imitation of the compassion of our Lord.  Our new youth worker, Kari, certainly has some great kids to work with.
Posted by Pastor Randy Powell at 9:19 AM No comments:

To veiw our church newsletter, click on the link below:
December King's Herald
Posted by FBC-CAR at 1:41 PM No comments: